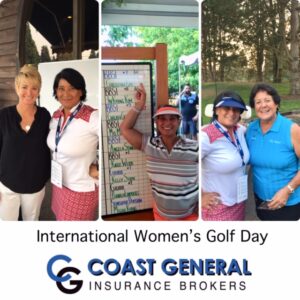 In honor of Women’s Golf Day, we highlight our CEO, Brenda Allison.   Brenda has had the honor of meeting and playing with some of the top Women golfers.

During Brenda’s visit at Columbia Edgewater in Portland, she met Kerrie Webb who is in the World Golf Hall of Fame. Kerrie has 57 Professional wins.  Kerrie shared her story on how she started in golf in Australia, where she is from and how she had the support of her family.

During the same golf event in Portland Brenda also met Nancy Lopez. Nancy Lopez was a member of the LPGA tour 1977. She won 48 LPGA tour events including three major championships. Nancy was inducted in the world golf Hall of Fame in 1987.

Brenda placed third at the Columbia Edgewater LPGA Pro-Am and had the honor of playing on Christina Kim’s team in 2016.

In 2017, Brenda had the immense honor to play with Carlota Ciganda.  Carlota launched her golf career in 2012 and won Player of the Year and Rookie of the Year.   Carlota is a fierce player and continues her upward trajectory in her career.  Today Carlota is ranked 11 in the world.

Fact: There are approximately 5.5 million adult female golfers.  That’s roughly only 23% of the total adult golfers.